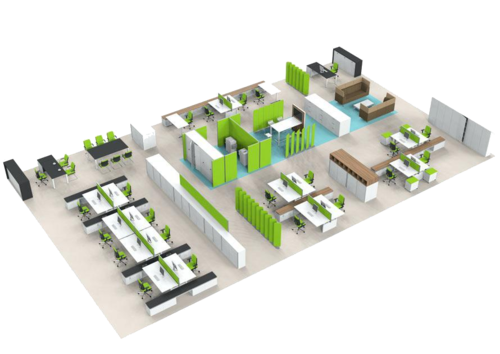 An office is generally a room or other area where an organization's employees perform administrative work in order to support and realize objects and goals of the organization. The word "office" may also denote a position within an organization with specific duties attached to it (see officer, office-holder, official); the latter is in fact an earlier usage, office as place originally referring to the location of one's duty. When used as an adjective, the term "office" may refer to business-related tasks. In law, a company or organization has offices in any place where it has an official presence, even if that presence consists of (for example) a storage silo rather than an establishment with desk-and-chair. An office is also an architectural and design phenomenon: ranging from a small office such as a bench in the corner of a small business of extremely small size (see small office/home office), through entire floors of buildings, up to and including massive buildings dedicated entirely to one company. In modern terms an office is usually the location where white-collar workers carry out their functions. As per James Stephenson, "Office is that part of business enterprise which is devoted to the direction and co-ordination of its various activities."